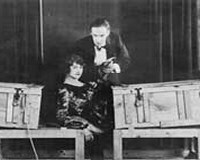 The first ever sawing of a woman in half was performed here.

Description: The Finsbury Park Empire was built by Frank Matcham for Moss Empires Ltd at a cost of 45,000 and opened on the 5th of September 1910 with a capacity of around 2000. The Theatre closed on the 7th of May 1960 and was demolished in 1965.

It saw many top showbiz acts of the time like Max Miller and Arthur Askey, but is renowned for being the first theatre where the saw-the-woman-in-half magic act was performed.

It was performed by PT Selbit on January 17th 1921 causing an immediate sensation, reviews called it a 'bloodthirsty ... hair raising' spectacle. Selbit responded with several publicity stunts such as ambulances parked outside the theatre. Between performances stage hands would take buckets of red liquid through the audience and pour into the gutter outside.

The act shut an attractive woman in a wooden box, with ropes holding her down, and cut the box in two. The audience loved it. Magicians everywhere rushed to make their own, bloodier versions.

2» The Finsbury Park Empire also played a leading role in the 1961 Cliff Richard film The Young Ones, when a group of youth club kids put on a show in a dis-used theatre, which it was at the time. (Mike Twigg)
Posted by Mike Twigg on 2009-10-28
1» I lived opposite Finsbury Park Empire in 1960s when it had just closed and a Cliff Richard film had recently been made there. I never had a photoghraph taken of the old Empire and wondered if there is one anywhere to be viewed (John)
Posted by John on 2007-12-28