The Black Dog of Newgate 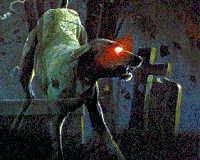 The black dog of newgate is a horrid ghost story!

Description: Amen Court contains the late seventeenth century houses of canons from the nearby St Paul's cathedral. It's a short distance from Paternoster Row, where monks finished their Pater Noster (a Christian prayer) on Corpus Christi Day before walking in procession to St. Paul's Cathedral. When they reached the corner of the Row they said 'Amen'.

The ivy-covered wall at the end of Amen Court has been in place since the court and the former prison were in existence. This section of the wall is believed to be haunted by a particularly unpleasant manifestation known for centuries as the 'Black Dog of Newgate'.

The Black Dog is said to have been witnessed gliding up and down the streets and crawling along the top of the wall immediately before an execution was to take place.

Apparently one prisoner called Luke Hutton wrote down his opinions about the existence of the Black Dog. It is thought that he believed it to be the ghost of a former prisoner called Schoiler, who had been eaten by the other starving prisoners. The act of cannibalism caused the prisoners to imagine that they had seen Schoiler at night, in the form of a black dog, patrolling the prison, his jaws open in preparation for his revenge.