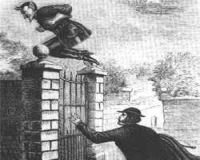 Description: Five days after his most infamous attack, Victorian fiend Spring-heeled Jack appeared again in the East End of London.

This time he knocked here at the door of within easy walking distance of Old Ford. When a servant-boy answered the knock, a cloaked figure asked if his employer Mr Ashworth was at home, Jack threw down his cloak and presented a most hideous appearance. The shocked boy screamed so loudly that Jack fled without accomplishing anything further.

Unidentified witnesses claim to have seen the figure bound off down the street (a later account declared it then 'leapt over a house' in it's flight.

The Children of Capland Street», 4.7km