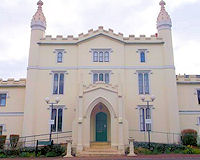 Wiseman founded the Dublin Review in 1836 to give English Roman Catholics higher ideals of their own religion and enthusiasm for the papacy.

Upon the re-establishment of the Catholic hierarchy in England and Wales in 1850 the Spanish-born Wiseman was the first to be appointed Archbishop of Westminster.

He moved to Golden Square in London, where he worked for the reclamation of Roman Catholic criminals and was passionate about establishing religious communities for both men and women and held many retreats and missions.

In the autumn of 1853, he travelled to Rome to see Pope Pius IX.

He is buried at Westminster Cathedral.