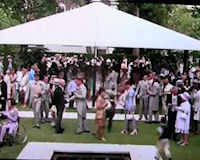 This is where Notting Hills wedding scene was filmed.

Description: The wedding scenes in the finale to the 1999 hit movie Notting Hill were filmed here in the Zen Garden of the Hempel Hotel.

The Hempel Hotel was a luxury 5-star hotel, built in 1997, a small boutique hotel with Zen inspiration, designed by Anouska Hempel, and featuring mostly white everything.

The hotel was a favourite of Victoria Beckham and the late superstar Michael Jackson reserved the entire hotel during his stay in 2006.

It was sold in 2013, demolished, and a luxury apartment block has replaced it.

A RocknRolla in Tower Hill», 4.4km