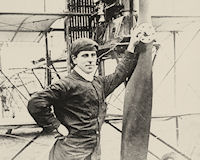 This is where the first airplane in Britain was designed.

Description: It was here in 1907 that aviation pioneer A. V. Roe built his first full-sized aircraft, and subsequently flying it in the early hours of the morning on Putney Heath without the Conservators' permission.

Sir Edwin Alliott Verdon Roe (18771958) left the Merchant Navy in 1902 to work in the design of vehicles, becoming a draughtsman in the car industry (Brotherton and Crockers Limited).

In 1906 the Daily Mail offered a prize for model aeroplanes capable of sustained mechanical flight. Roe won first prize encouraging him to build an aeroplane which would be able to carry him aloft. A half-used stable behind the surgery here of his brother (Dr Spencer Verdon Roe), was ideal and construction of the began in 1907.

He flew his early prototypes on Walthamstow Marshes was the location of Roe's later attempts to build and fly his early aeroplanes.

The Aeronaut of Holloway», 16.km