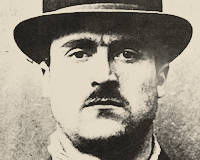 This is where murderer Fred Browne was living.

Description: Fred Browne and his wife rented two rooms here on 24th September 1927, and 3 days later he coerced his prison pal Pat Kennedy to catch a train into Billericay, steal a car, and drive it back to London.

The bungled plan went wrong when a policeman, PC Gutteridge, waved the car down and Browne shot the policeman twice and then shot him twice again through each eye by the side of the road.

The car was found and forensics linked it back to Browne and they were both arrested, imprisoned and executed on 31st May 1928.

When the body of PC Gutteridge was found by the local postman the following morning he had to ride miles to find a phonebox and even then he couldnt get through to the local police station and the operator refused his second call to another station in Ongar. His frustrations and the delay in raising the alarm led to the start of the 999 service 10 years later.

The Assassination of Mr Thynne», 3.2km