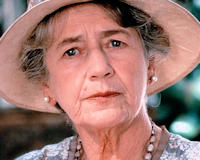 The home of Dame Peggy Ashcroft.

Ashcroft played leading roles in Shakespeare, Chekhov and a variety of tragic, comic, classical and contemporary theatre. Later performances included her Oscar-winning portrayal of Mrs Moore in the film A Passage to India (1985) and Barbie in ITV's The Jewel in the Crown (1984). She also served as the Director of the Royal Shakespeare Company from 1968.

She lived in this impressive Grade II listed detached family home in the heart of Hampstead village between 1956 and 1986 when she reluctantly left to be nearer her son and his family.

She owned and displayed here a painting of herself in Venice by the English Impressionist painter, Walter Sickert.

The residence was built about 1813 for the manorial bailiff and the summer meeting of the Court Leet and Court Baron of the Manor of Hampstead was held at Manor Lodge well into the 20th century.