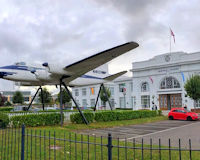 After the end of the war it became an Royal Air Force training base, and in 1919 the first member of the Royal Family to learn to fly gained his wings here (Prince Albert, later George VI). Future PM Winston Churchill took extensive flying lessons here and was nearly killed during a take-off crash also in 1919.

On 29th March 1920 it joined forces with Waddon Aerodrome next door to open Croydon Aerodrome - for all international flights to and from London. Croydon was the first airport in the world to introduce air traffic control, a control tower, and radio position-fixing procedures.

In the Second World War the airport was closed to civil aviation but played a vital role as a fighter station during the Battle of Britain. Number 92 Squadron flew Supermarine Spitfires from here during the early part of the Second World War and the Battle of Britain. As such the airport and surrounding supporting factories were targeted by Germany and badly damaged in 1940.

After the war there was deemed insufficient space to expand and instead decided to invest heavily in making Heathrow the biggest airport in Great Britain. The airport was closed after the last scheduled flight on the 30th September 1959.

Today some buildings remain including a visitor centre.