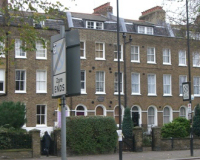 Description: When future cinema legend Charlie Chaplin was 9 (this was 1898) his mother was committed to an asylum, and Charlie and his brother went to stay with their estranged father here in Kennington Road.

Chaplin senior resided here with his mistress, Louise, and their small son, who was four years younger than Charlie.

When his mother Hannah was released, he left and went to stay with her.