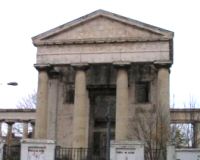 The grand remains of the Orphan Asylum turned art object.

Description: Only the portico remains of the grand 1821 Orphan Asylum founded by Reverend Andrew Reed for orphans from 'respectable' families reflecting the status that Clapton held then.

James Edmeston wrote 2000 hymns here, for the children to learn and recite.

The asylum was closed in 1866 when typhoid hit, and the Salvation Army moved in in 1882 and renamed it Clapton Congress Hall.

It returned briefly to its role as providing asylum to children when in 1937, 400 Basque refugee children from the Spanish Civil War were accommodated here.

In 1970 they moved out to Laura Place round the corner. Eight years later the main buildings were demolished, leaving just the portico and colonnades.

Turner prize winner Martin Creed brought it back to the people with a garish neon sign saying 'Everything is going to be alright', something the locals took to. 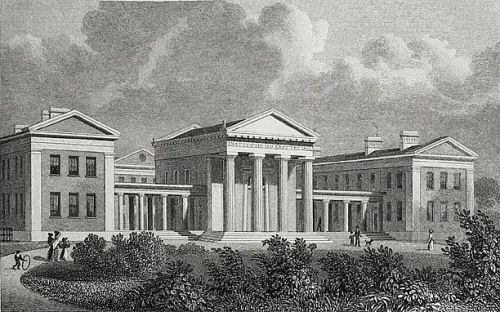 2» I remember this hall from the early 70s, if you entered the building at the entrance on the far left, there was a large flight of steps that lead down to the basement level, which was a tunnel that ran the complete length of the front of the building, including under the stage in the main hall, this tunnel had various rooms off of it, and was at one time used as an air raid shelter during ww2. in one of the rooms were two huge boilers for the heating, very near to a huge walk in vault, i can only assume that the vault was left in situ when the building was demolished, as it would be very heavy to lift out, and quite costly. the main hall had grate light fittings, like those in the old type cinemas, hanging from the ceiling, with a massive religious picture at the end opposite the main doors. this may have been a listed building at one time, but the owners seem to have left it in disrepair for many years, thus making it an unsafe structure, and was demolished. what a waste of a once grate structure. (tarik iqbul)
Posted by tarik iqbul on 2009-05-12
1» my uncle frank ingold attended this school in 1901 he is listed in 1901 census as 14 yrs age and attended this institution in Watford Hertfordshire. Is their a picture of the school in Watford on the Internet? Both parents had died at this time, very interesting to me. (frank ingold)
Posted by frank ingold on 2006-12-27