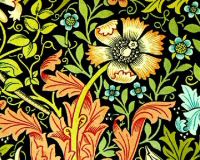 Description: William Morris, Designer, Craftsman, Writer and Socialist, lived and worked here between 1848 to 1856, in this former Water House, a substantial Georgian dwelling of about 1750 which is set in its own extensive grounds (now Lloyd Park).

Now it is The William Morris Gallery - the only public museum devoted to this country's best known and most versatile designer, with internationally important collections illustrating Morris's life, achievements and influence.