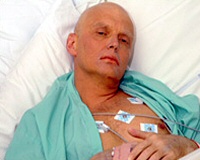 Description: This is where the Russian defector Alexander Litvenenko was staying with his wife when he was murdered by poison in London in November 2006.

He left here on 1st November and travelled into London, after several meetings he returns here and complains of feeling sick. Two days later he was admitted to Barnet General Hospital where he nevere recovered from Pollonium poisoning.

2» Apparently Barnet General thought he had a bad case of "gastro" and doctors were a little puzzled that it kept on going, so he was transferred to the Royal Free in Hampstead who could actually diagnose the poisoning. Poor guy might have stood a chance if he went elsewhere first. (Juliet Murray)
Posted by Juliet Murray on 2007-10-05
1» i got really upset when alexander litvinenko died. please put up a home page with some nice facts about him. make a tribute please. (bonnie)
Posted by bonnie on 2007-01-13