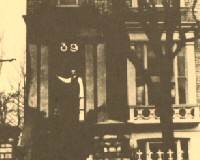 This is where Dr Crippen murdered, mutilated and buried his wife

Description: Hawley Harvey Crippen was an American, born in Michigan in 1862, who qualified as a doctor in 1885 and worked for a patent medicine company. He had come to England in 1900 and moved here at 39 Hilldrop Crescent on September 21, 1905, with his second wife Cora Turner, who was better known by her stage name of Belle Elmore.

Early in 1910 Belle disappeared and Crippen moved his mistress Ethel le Neve into the house, and she began to wear his wife's clothing and jewellery. Belle Elmore's friends reported their suspicions to the police. Crippen had been telling people that she had moved back to the USA to see a sick relative.

Detective Chief Inspector Walter Dew visited Crippen, and left the premises after Crippen had claimed that his wife had eloped with a lover, and a search had not revealed anything of a suspicious nature.

Crippen and Ethel le Neve left the country for Antwerp, and then took a cabin on ss Montrose bound for Canada. The house at Hilldrop Crescent was searched again, however, and remains of a female body were found buried beneath the cellar. Dr Bernard Spilsbury, the famous pathologist, identified the body as that of Mrs Crippen from a piece of abdominal scar tissue, and found that there were traces of a poison hyoscene in the body.

The search for Crippen was assisted by the master of the ss Montrose who suspected that the boy accompanying one of his passengers, Mr Robinson, was Ethel le Neve in disguise. He entered history by the first use of the telegraph to relay his conclusions to the ship's owners and the police. Walter Dew took a faster ship the ss Laurentic and arrested Crippen before he could land in Canada.

Crippen was convicted at the Old Bailey and executed. Ethel le Neve was acquitted.

Alas the house is no longer there in its original state but a block of flats now stand on the site. However the street name of course does still exist so you can take a photo the plaque at least as a souvenier of any visit! 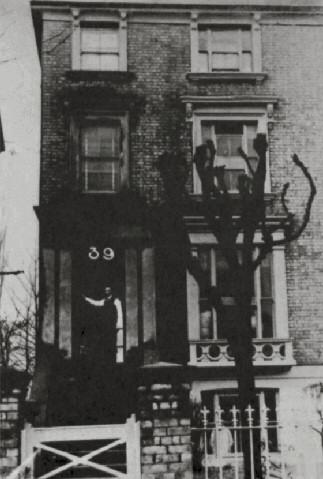 3» The photo of 39 Hilldrop Crescent shows a later owner of the house at the door. I have the original postcard with more detail if anyone is interested. (David Feather)
Posted by David Feather on 2009-11-09
2» If my memory serves me right, Im a 75 year old widow, and i believe I lived at Dr.Crippens house, renting approxiately 1954/1955. The owners were italian at this time. They told me about the history of the house. I would appreciate any comments. Josephine (Josephine)
Posted by Josephine on 2008-07-03
1» All mention 39 Hilldrop Crescent was destroyed by a bomb in the war but Eric Ambler says 39 was changed to 30 Hilldrop Crescent and still exists. I have seen it in 1970. Also every picture of Crippen and Le Neve in the court says they were in the Criminal Court trial. This must be false. I suspect it was in the initial proceedings in Bow Street, Crippen and Le Neve were tried separately at the Old Bailey. (Charles Jarrott)
Posted by Charles Jarrott on 2008-05-24