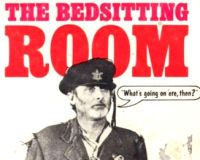 Description: Spike Milligan based a character who lived here in his 1969 play and subsequent film The Bed-Sitting Room.

The fictional character was the closest heir to the British throne after the outbreak of nuclear war.

She was a Mrs. Ethel Shroake of 393a High Street, Leytonstone, who eventually appears in the final scene.

Note that it is Leytonstone High Road rather than High Street in the real world.