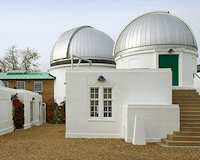 Mill Hill's observatory dating back to 1928.

Description: University College London's Astronomical Observatory (UCLO) is one of the best-equipped astronomical facilities for student training and research in the UK.

In 1925, Mr JG Wilson offered the University of London a 24-inch reflecting telescope that had been the property of his late father, Dr WE Wilson, FRS. It had been made by Grubb of Dublin in 1881 and was then located at his private observatory in Daramona, County Westmeath, Ireland. The gift was accepted.

Hendon Urban District Council agreed to lease this site in Mill Hill Park for 999 years at a nominal rent. The Senate of the University raised the 5,000 cost of constructing a suitable building and additional funds were provided by University, King's, Bedford and East London Colleges and from the London School of Economics.

This gave birth to the foundation of the 'University of London Observatory'. The Observatory has been exclusively managed by University College London since 1951.