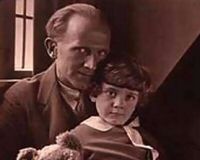 Description: World renowned childrenâs writer and author of Winnie the Pooh, A A (Alan Alexander) Milne lived here from 1919 to 1942.

A.A. Milne (1882-1956) always acknowledged that it was his wife, Daphne, and his young son, Christopher Robin, who inspired him to write the poems and stories the literary journey began in 1924 when the Very Young Christopher Robin was introduced to an American black bear at the London Zoological Gardens. As he watched his father, Alan Alexander Milne, pipe in mouth, on the putting green at Cotchford, the young country-lover was innnocently unaware of the literary adventures of Winnie-the-Pooh, which had begun during the wet Welsh summer of 1923 and the effect the bear would have on his life.