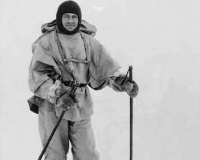 Description: When Scott returned from the Antarctic in 1904 he moved the family to a rented house at 56 Oakley Street. This four-story Victorian terrace stands three doors north of Cheyne Walk, where at No 133 Scott's future wife had a three-room flat.

Notes at Scott Polar Research Institute suggest that Scott wrote at least part of The Voyage of the Discovery here (a claim also made for Markham's 21 Eccleston Square house).